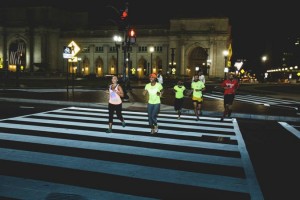 Hundreds of runners are expected to descend on the the H Street corridor next weekend for an evening 5K race, organizers of the run said this week.

The Midnight on Mars 5K could include as many as 250 people who have signed up to run on sidewalks on H Street NE and other area roads on Aug. 1 from 9 to 10 p.m.

Matt Green, a co-founder of the District Running Collective, which is organizing the race, said at a community meeting that the runners won’t all start at the same time. Instead, the runners will be split into groups that leave the starting line at different intervals, he said.

The annual run, which began in 2013, has been a “positive” experience for the District, he said.

“It’s not like a normal run or race where people are really worried about themselves,” Green said. “We promote community and motivate one another.”

The race will begin and end at Gallery O on H at 1354 H St. NE. The gallery will host “The Running Room,” which will have fitness vendors and giveaways. After the race, the gallery will have drinks and live music.

Runners can register for the race online for $40.