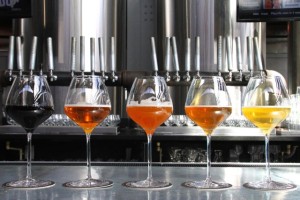 Bluejacket is set to begin pouring and selling bottles of its beers in a new space at Navy Yard’s Boilermaker Shops this week.

The brewery’s bottle shop and tasting room are slated to open officially on Saturday in the former Buzz Bakery location adjoining Bluejacket at 300 Tingey St. SE. The bakery, which was owned by Bluejacket owner Neighborhood Restaurant Group, closed last month.

The grand opening, which will coincide with DC Beer Week, will feature “a bevy of our rarest bottles,” including its Whiskey Barrel-Aged Mexican Radio, Red Wine Barrel-Aged Swirl and Judge Ruby, according to a Facebook post for the event.

“This is the perfect opportunity to visit the renovated space, sample some classic, vintage and rare Bluejacket brews on draft, and shop our expanded bottle selection,” the event post says.