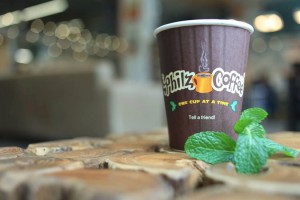 A San Francisco-based coffeehouse chain is slated to open one of its first locations outside of California at The Yards in Navy Yard next year, the area’s developer announced today.

Philz Coffee is expected to bring its Tantalizing Turkish, Philharmonic and other java blends to a mixed-use building across from the Boilermaker Shops on Tingey Street SE this spring, according to developer Forest City Washington. The building, known as the Arris, is still under construction.

Founded in 2003, Philz currently only has locations in California. But the chain is set to move into the D.C. market with a shop in Adams Morgan later this year, according to District Source.

The shop along the Capitol Riverfront in Navy Yard is slated to be Philz’s second location in the District. Forest City Washington’s announcement followed hints by the developer last month that Navy Yard would have a new coffee shop.

“Philz Coffee is a California-based company on a mission to better people’s days by reinventing the coffee drinking experience,” Forest City Washington said in a news release. “In addition to an impressive array of exclusive, handcrafted, flavorful blends, Philz Coffee prides itself on its extraordinary customer service and culture, where each cup of drip coffee is personalized by their baristas.”

Navy Yard also is slated to get a Pacers Running this fall, according to the developer. The chain, which sells running shoes, workout clothes and other accessories, is slated to open at the Boilermaker Shops on Tingey Street SE in October, after initially looking to open this month.