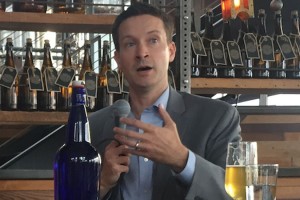 Councilman Charles Allen of Ward 6 raised a beer to the District’s breweries at Navy Yard’s Bluejacket last night, pledging to help them grow in D.C.

Speaking at a DC Beer Week talk on “How Government Affects Your Beer,” Allen told members and supporters of the District’s nascent beer industry that breweries are “really vibrant parts of our community,” bringing new jobs and activity to neighborhoods.

“I am always looking at ways in which we can help support them and grow them,” he said.

Allen said he would like to have the District do more to promote a “made in D.C.” brand that celebrates local breweries and other businesses. Such a move would help them, he said.

The District should follow the leads of New York and Chicago, which have created “really strong branding” around their names and the products the cities produce, he said.

“It fosters a really strong sense of loyalty among your customers and among the people who are going to support you,” Allen said.

He also said he would support more breweries in the Capitol Hill area.

“I’ve heard some people say that they feel dumped on by breweries” in Ward 5, Allen said. “I would love [breweries to] come to Ward 6.”