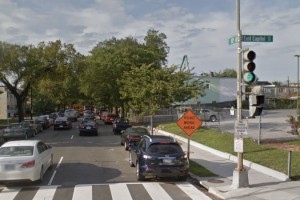 A thief with a knife robbed a man in Hill East as the victim was walking to the Stadium-Armory Metro station this morning, police said.

The robbery happened on the unit block of 17th Street SE about 5:45 a.m.

A man first flashed a knife at the victim and said, “You know what time it is,” according to authorities. The victim then handed the thief his backpack before the robber fled.

The thief was last seen heading west on the 1600 block of A Street SE.

Police described the suspect as a 5-foot-11 to 6-foot-2 man with dreadlocks, a black striped shirt and dark jeans.