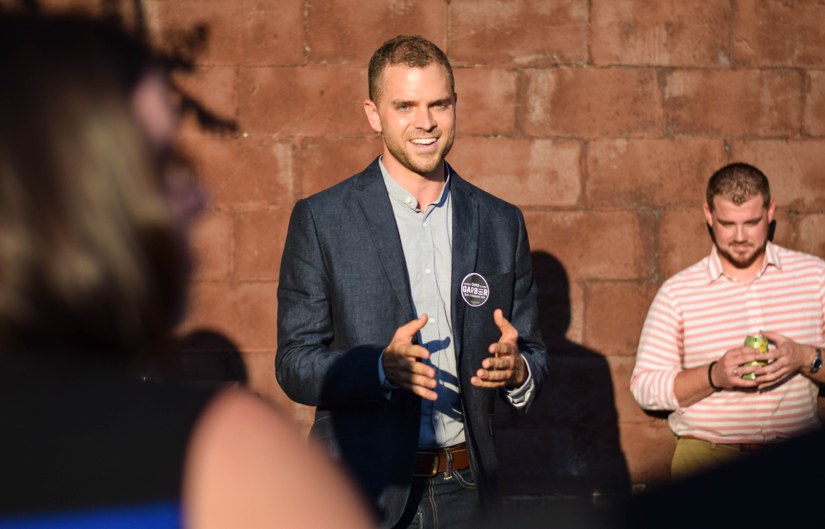 David Garber has a strategy: Hit incumbent at-large Councilman Vincent Orange where he’s vulnerable. In a campaign announcement video, Garber grabbed the attention of some voters by scolding Orange’s ethics. “We simply deserve better,” Garber said. But Garber acknowledges it takes more than shaming an incumbent to win an election.

Borderstan, a Hill Now sibling publication, spoke with the challenger and former Navy Yard ANC commissioner about his upcoming campaign:

David Garber: I’m running for this seat because I want to be the advocate for communities across the District. What that’s meant for me in the past, both as an engaged citizen and as a two-term elected ANC Commissioner, has been that a lot about learning the value of listening to residents as anything is happening within neighborhoods and District-wide, and making sure that, in the way the city grows and in the decisions that are being made and what’s being prioritized across the District, we’re taking a lot of our feedback from the people in these actual communities.

What will be your first priority or new initiative, and why?

The three top issues for me right now are education, public safety, and housing. I’ve had a fair amount of experience within the education sphere, whether as a substitute teacher or advocating for a new public elementary school in the neighborhood where I was ANC commissioner. That school is opening this fall.

With regards to the growth of the city, I’ve lived in three very different neighborhoods in my time in the District. I’ve lived in Anacostia, east of the river, I’ve lived in Navy Yard, and I’ve lived in the Logan Circle/Shaw neighborhood. I feel like those are all pretty distinct, and have given me a pretty unique perspective for understanding how certain parts of the city have been overlooked and haven’t been served well in the past and wanting to make sure that, as we go forward, we’re being equitable about our development and our investments across the city.

Which parts of the city do you think have been overlooked?

A lot of people, especially east of the river, are concerned that real investment hasn’t been made in a lot of those communities over the years in the way that it has been other places. As a resident there, myself, what I was seeing at the time was that it was coming down to the decisions of political leadership. That was my first crash course in realizing that, if I want to see something change with regards to how the communities were being prioritized I needed to get involved, myself.

But you could point to other communities. Kennedy Street NW in Ward 4. Places in Ward 5. Fortunately, we’re in a time where there is a lot of investment in D.C. and different areas are being brought up in different ways. Hopefully we’re doing that while taking care of all of the existing residents that are in these communities. But I do think that more could still be done.

What did you learn from your time as an ANC commissioner in Navy Yard that you could apply to serving on the D.C. Council?

One of my first lessons was in the absolute importance of listening to residents at every step of the way, both in my decision making and with regard to any issues that were coming through the neighborhood.

I started a citizens’ development advisory committee, for example, that was able to speak into a lot of development that was happening in the Navy Yard ballpark area, and I made sure that I was reaching out to the community both online and in-person on issues there were really important. A lot of these issues did relate to development.

The other lesson I learned was just about the importance of working with my colleagues to make our work on the ANC as effective as possible. I think it’s easy to come into an elected position feeling very black-and-white on issues and not wanting to work with others who might disagree with you. One of the things that I enjoyed the most during my time on the ANC was working with people who we might not have lined up 100 percent on issues, but we had to work together and we had to find a common solution. As a councilmember, it’s important to be effective.

As you know, crime is a big topic in D.C. right now. Last night, you went on a ride-along with police. What did you learn?

My biggest priority right now is making sure that I’m doing everything I can to learn about what possible changes need to be made or what actions can be taken right now to improve the safety situation around the District.

I live in Shaw, and me and my neighbors feel like there’s a lot of violent crimes taking place almost daily. There has been an uptick in violent crime, it absolutely feels like there has been. I know people are looking to leadership right now to both make changes, whether it’s within the policies of the Metropolitan Police Department or how they’re doing their beats around the District. I’m trying to both listen to as many neighbors as possible, listen to police officers, try to get a sense for what’s working and what’s not working, so that we can move forward in a way that everybody feels safe in their communities, regardless of where they are.

Based on what you saw last night, is there anything that you’d want to change?

One thing that kept coming up was the need for more police officers in the District. There was a hiring boom in the ’80s and ’90s that is now turning into a retirement boom. Unfortunately, the new hires and police academy graduates aren’t catching up to the people leaving the force.

We need to make sure that we are providing the best place for these police officers to be when they’re choosing where to work. Whether that is offering incentives for living within the District or what have you, I think there are absolutely ways to making this a city where officers want to live because they feel supported and they’re able to get their work done.

Orange is the incumbent, so he most likely has an advantage. How do you feel about the upcoming race?

I feel really great about this upcoming race. I’ve felt really humbled over the last couple of weeks by the incredible amount of support that I’ve felt from people around the District, both in the encouragement and in their financial support, which at the end of the day, is going to mean a great deal in this election.

I’ve got an awesome team behind me. … I’m excited to start some of the more visible elements of my campaign, like door-knocking, meet-and-greets and introducing myself to voters and listening to issues that they care about.

This interview has been edited slightly for clarity and length