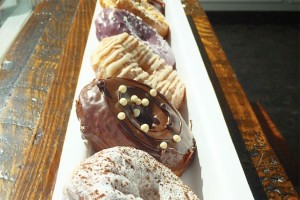 For today only, the store is giving away a free cup of coffee to every customer who buys two doughnuts.