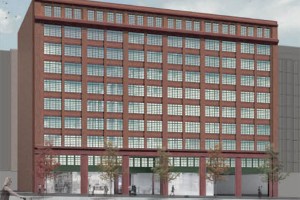 (Updated at 3:35 p.m.) NoMa may get a seven-screen movie theater as part of a new development, according to documents filed today with the D.C. government.

D.C.-area developer The JBG Companies is planning to build a seven-screen cinema as part of a mixed-use building between North Capitol, M, N and 1st streets NE, according to the paperwork submitted to the D.C. Board of Zoning Adjustment. The theater would hold about 1,200 seats.

It wasn’t clear in the documents what kind of movies the cinema would show or when it would open. But Landmark Theatres, which owns the E Street Cinema in downtown D.C., announced in 2013 it would build a 10-screen cinema in NoMa, Washington Business Journal reported.

A JBG representative couldn’t immediately be reached for comment.

The development, which would be called “Capitol Point South,” would include about 540,000 square feet of residential, retail and office space.

“Applicant will show that the public good will be served by a high-quality infill development project that will replace an outdated office building and surface parking with a state-of-the-art new mixed-use building that will contribute to the revitalization and resurgence of the NoMa neighborhood,” JBG said in a filing.

Image via The JBG Companies