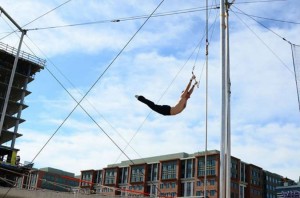 (Updated at 4:25 p.m.) The trapeze school along the Capitol Riverfront plans to move to its new location in November, a representative of the facility said today.

Trapeze School New York – Washington DC previously announced that it would be moving two blocks from its current location at 4th and Tingey streets SE to N Street and New Jersey Avenue SE this fall.

The school plans to hold classes at its current location until mid-November, office coordinator Leigh Rice said. It is looking to begin construction on its new facilities in the next month or two, and the facility will be ready to open sometime this winter. The new facility will include indoor and outdoor trapeze rigs.

The school offers classes in flying trapeze, static trapeze, trampoline and silks, in which performers pose from dangling pieces of fabric.

The facility’s current location is slated to become the site of a 10-floor condo building called Yards Condominium. Construction on the building is expected to conclude in 2018.