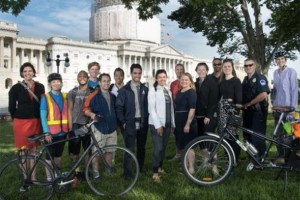 The congressional office that oversees the operation and maintenance of the U.S. Capitol grounds has picked up some kudos from an organization that advocates for “bicycle-friendly” communities.

The Architect of the Capitol received a bronze award for “bike-friendliness” from The League of American Bicyclists, the group announced today. The league this year awarded more than 100 organizations a platinum, gold, silver or bronze award for helping make the United States “a safer, happier, and more sustainable place to live and work,” Amelia Neptune, the initiative’s manager, said in a statement.

The AOC has worked with members of Congress and other federal officials to encourage cycling, according to the league.

“We are so pleased to make the U.S. Capitol campus a more welcoming place for biking commuters and the visiting public,” Architect of the Capitol Stephen Ayers said in a statement. “It is rewarding to be recognized as a Bicycle Friendly Business and to know that we have a passionate group of employees who implemented a cohesive program to achieve this recognition.”