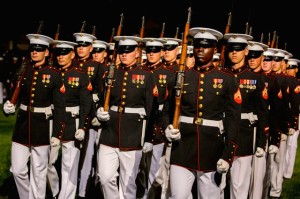 Marine buglers and drummers are scheduled to perform at their last evening parade for the year on Barracks Row this week.

The performance is set for 8:45 p.m. Friday at the Marine Barracks. The evening parades, which have happened every Friday this year since May 1, feature the Silent Drill Platoon, Marine Corps Band, and Drum and Bugle Corps.

Although advance tickets to the parade no longer are available, the Marine Barracks offers free admission to people without reservations if ticket holders haven’t arrived by 8 p.m.

More than 200 Marines take part in the parades, which are about an hour-and-a-half long, The Marine Barracks has seating for 3,500 people at each parade.

A senior ranking officer and his or her guest also is honored at each parade.