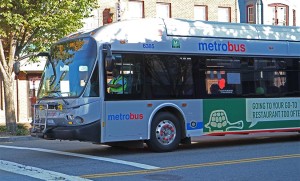 Councilman Charles Allen of Ward 6 is encouraging locals to speak about plans by Metro to enhance, reduce or eliminate service by some buses that travel through the Capitol Hill area.

Allen wrote on his Facebook page yesterday that about a dozen bus lines with stops in his ward could change. But locals have the opportunity to tell Metro if they support the agency’s proposals.

Locals have other ways to tell Metro what they think about the modifications to the 93 and 34 bus lines; the proposed elimination of the D3 bus line; service reductions for the 80, A42, A46 and A48 bus lines; and service enhancements for the 97, D4, X1, X8 and X9 bus lines.

In addition to the survey, they can send an email to Metro and attend a Sept. 17 meeting about the changes.