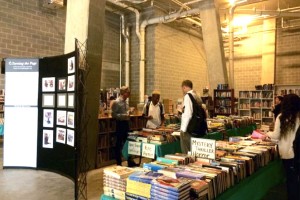 (Updated at 4:15 p.m.) NoMa is set to lose its only bookshop in the coming weeks, an official with the pop-up store said today.

Carpe Librum’s last day in the neighborhood is slated for Sept. 20, said Robin Crowell, the development manager for Turning the Page, the nonprofit organization that runs the pop-up used bookstore and its sister shop in downtown D.C.

“Overall, the NoMa pop-up was an enormous success,” she said in an email this afternoon.

Turning the Page plans to open another pop-up bookstore somewhere in D.C. in the future, Crowell said. But the organization doesn’t have any definitive plans yet, she said.