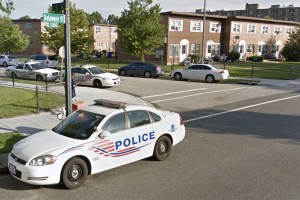 A man was shot about a block from the Metropolitan Police Department’s First District station in Southwest last night.

The shooting happened on the 200 block of L Street SW about 10:15 p.m., according to authorities.

Officers found a man with numerous gunshot wounds to the upper part of his torso, police said. But authorities haven’t released a description of the shooter.

MPD continues to investigate the shooting.

The victim was the third man shot in Southwest this summer.