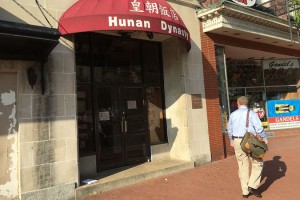 A Chinese restaurant about two blocks from the U.S. Capitol is now open following a D.C. food safety and hygiene inspection that uncovered a “heavy” rodent infestation last week, according to the D.C. Department of Health.

Hunan Dynasty at 215 Pennsylvania Ave. SE passed a DOH follow-up inspection Friday after an agency inspector closed it Tuesday, allowing it to reopen.

The inspector on Tuesday discovered rodent droppings on a table by the eatery’s microwave, beneath its cook line equipment and on other kitchen equipment, according to a recently released DOH report.

The restaurant also had blocked hand-washing sinks without soap, “excessively unclean” shelving in its walk-in cooler and “encrusted debris and heavy buildup of grease” on cooking equipment exteriors, among other issues, the report says.