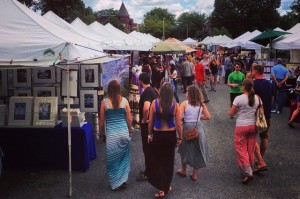 Hundreds of people have signed a petition opposing the D.C. government’s planned takeover of the weekend flea markets at Eastern Market.

The flea markets on the 300 block of 7th Street SE are set to transfer management at the end of September from private companies to the D.C. Department of General Services, which manages the rest of Eastern Market.

DGS announced the move at the end of July, saying that allowing Diverse Markets Management and Washington Arts, Antiques, Crafts & Collectible Associates to continue managing the flea markets could affect the District’s bond rating. In a letter delivered to vendors in August, DGS explained that all current vendors will be allowed to remain at the flea market and that customers will not notice any changes, Capitol Hill Corner reported.

But Mike Berman, the manager of the Sunday flea market, said the management shift will hurt vendors and customers. Berman launched a “Save the Flea Market” campaign in response to the planned shift, a campaign that now includes the petition on Change.org.

“We firmly believe that DGS cannot adequately manage the flea market, would not attempt to accommodate everyone, would create havoc for the adjacent and participating businesses and would negatively affect the public and neighborhood supporters of the market,” a letter accompanying the online petition says.

The petition, which is addressed to Mayor Muriel Bowser and Ward 6 Councilman Charles Allen, has garnered more than 200 signatures since it was created Tuesday morning.