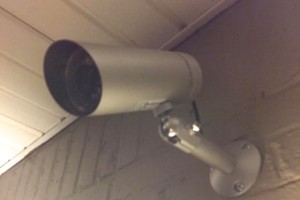 Councilman Charles Allen of Ward 6 is looking to give residents of Capitol Hill and other parts of the District a financial incentive to install security cameras at their homes.

Allen tomorrow plans to introduce legislation that would offer a onetime tax credit of up to $100 to any D.C. homeowner who buys a security camera to help fight crime, according to his office.

“It’s just one idea of many needed, but after seeing the number of investigations that rely on home security cameras to identify suspects and aid the police, I’m convinced it’s an approach we need to explore,” he said in a newsletter to Capitol Hill-area residents today.

So far this year, surveillance cameras have captured more than a half-dozen suspected package thefts from homes in the Capitol Hill area, a review of Hill Now stories shows.

Hill East resident David Heyman told Hill Now earlier this year that the camera he trains on his doorstep provides “peace of mind.”

“What you’re telling the bad guy is, ‘Go someplace else,'” he said.