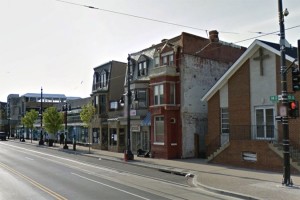 The Metropolitan Police Department tweeted yesterday afternoon police were looking for three men in Eastern uniforms in connection with the armed robbery on the 1300 block of H Street NE. The block includes the Atlas Performing Arts Center, Rock & Roll Hotel and Maketto.

Police haven’t publicly released any other information about the robbery. But video of the robbery MPD shared with Eastern principal Rachel Skerritt and several of her colleagues shows three young men who don’t appear to attend the school and weren’t wearing its uniform, she said.

The suspects all wore similar green shirts and jeans, which aren’t worn by Eastern students, Skerritt said. But it wasn’t clear what school or organization might use the outfits as a uniform, she said.

“I was relieved to see that in this case it doesn’t seem to be associated with our students,” Skerritt said.