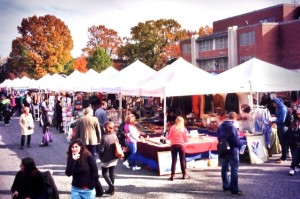 The operators of the weekend flea markets at Eastern Market have signed deals to stay in charge after the District government reversed its earlier decision to take over the markets.

Diverse Markets Management, the company that runs the Sunday flea market on the 300 block of 7th Street SE every Sunday, announced yesterday that it has signed a two-year extension of its license to operate the market.

The operator of the Saturday flea market, Carole Wright, signed a separate deal earlier this month to operate that market until the Hine School development is finished and for at least three years afterward, she said in an email.

The contract extensions come after several months of back-and-forth starting with an announcement in August by the District Department of General Services that it would take over operation of both weekend markets. In response, Michael Berman, the president of Diverse Markets Management, started a letter-writing campaign and an online petition to keep the current operators in place.

On Sept. 4, the DGS backed off its decision to take over the markets and announced that it would be negotiating contract extensions with the operators of both markets.

“Rather than destroy a longstanding vibrant marketplace with rich cultural and artistic diversity, we appreciate that city leadership recognized the importance of continuing our enterprise,” Berman said in a statement on the license extension.

more stories
Previous
Crime Roundup: Boys Beat, Rob Kid in Capitol Hill Area
Next
Thanks to Our Sponsors and Advertisers