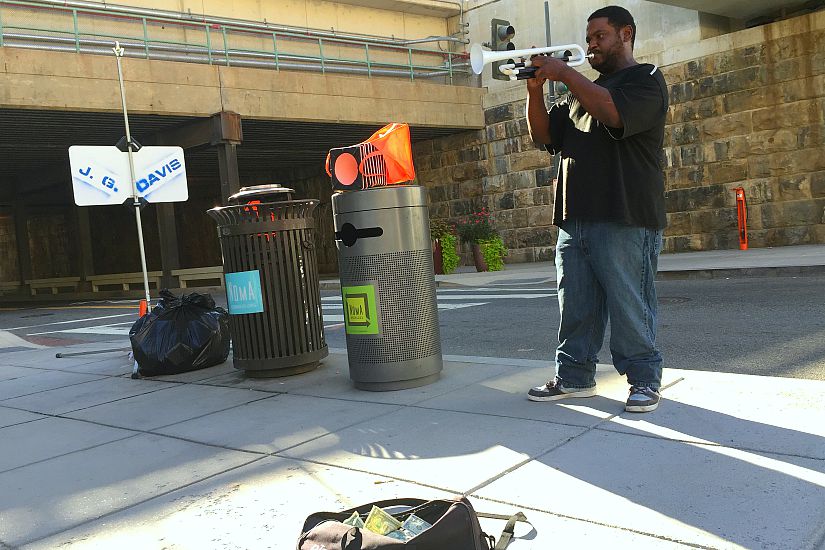 Hill Now periodically publishes profiles of locals — from longtime residents to newcomers, from government officials to ordinary folks. Know someone we should feature? Email us at [email protected]

Trumpet music has become a familiar sound to residents near the NoMa-Gallaudet University Metro station. They’ve heard “Amazing Grace,” “Military Taps,” “When The Saints Go Marching In” and a slew of other traditional American tunes.

The morning accompaniment is courtesy of Melvin Simpson.

He plays a pTrumpet, a brand of plastic trumpet that offers musicians a less expensive alternative to a heavy, brass instrument. This is critical for Simpson, who is homeless.

“I just try to entertain so I can make it through my day until I can find a regular job,” he said. “I needed to do something to bring in some income, so I just play my trumpet.”

Simpson grew up in Southeast D.C. and attended Eastern High School. At the school, he played baritone horn and trombone in the marching band, but hasn’t had any other formal musical training.

He taught himself how to play the trumpet, and all the songs he knows, he learned by ear.

The trumpet was a gift he received after he spent a week or so whistling popular tunes around the block. One day, a local couple approached him.

“I had just met them, and we started talking about my past and what I did,” Simpson said. “We talked a lot about instruments. I told them I was looking to get back into it but didn’t have the money for it. So the woman found this trumpet online for the right price and said she’d foot the bill.”

The instrument came at a small price to Simpson: Play “Happy Birthday” for the woman on her birthday.

“I’m just happy I was able to provide,” he said. “It was such a small task for what they did for me.”

Simpson did not identify the woman who purchased the trumpet.

When he’s not performing, Simpson spends his time at a nearby homeless shelter, where he said he has received a lot of support.

“They’re actually pretty surprised that someone’s actually doing something, but they see the initiative I’m taking,” Simpson said. “It’s hard, but I keep a positive attitude.”

After working on his repertoire around NoMa, Simpson plans to branch out to play at more locations, like Union Station. For now, he said he’s happy to do so while he waits on a Social Security card and can continue the job hunt.

“You could be going through something bad and hearing a song can just lighten up your whole day,” he said. “Music is a just a wonderful thing that speaks to the soul. It’s something this place lacks.”