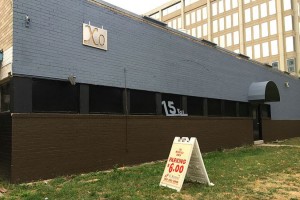 Live jazz, food and cocktails might come to a vacant building in NoMa within the next couple months, a representative of a forthcoming restaurant said today.

XO, which will occupy the former Venus Lounge space at 15 K St. NE, is slated to open by Thanksgiving, said the restaurant’s representative, Jeff Jackson. The new jazz lounge plans to serve American cuisine for lunch and dinner, alongside beer, wine and cocktails.

“It’s a mainly commercial area, so the property owner is hoping to attract people who will stop in after work for drinks and something to eat,” Jackson said.

The restaurant has applied for a liquor license, which is the first step the establishment has taken toward opening. But the property’s owner also has plans to renovate the space’s interior.

XO is planning to accommodate 320 people inside and 60 people outside in a summer garden planned for the rear of the building, according to the liquor license application filed with the D.C. Alcoholic Beverage Regulation Administration this week.

The restaurant is looking to open at 10 a.m. seven days a week, closing at 2 a.m. Sundays through Thursdays and 3 a.m. on Fridays and Saturdays.