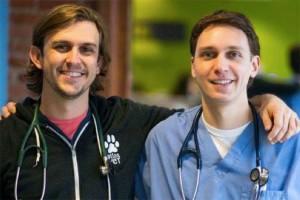 AtlasVet on the H Street corridor is raising money for suicide prevention in honor of one of its doctors who killed himself.

The animal hospital at 1326 H St. NE has organized a team to participate in the American Association for Suicide Prevention’s “Out of the Darkness” walk on Oct. 10 as a tribute to veterinarian Keith de la Cruz, who died in July.

More than a dozen of the doctor’s friends and colleagues will take part in the walk, an annual event to increase awareness of suicides and get money to help stop them. The team so far has raised more than $2,000 online, about $3,000 less than the animal hospital’s goal of $5,000.

Chris Miller, a veterinarian at AtlasVet who organized the team for the walk, said the event is a chance for the animal hospital’s employees to work through their grief together. AtlasVet hired counselors for workers following de la Cruz’s death, and Miller said the walk is an opportunity to channel their emotions into action.

“You want to be able to do something to help, and it’s hard when there’s nothing you can do,” he said. “I think knowing that we’re going to have this event to prevent something like this from happening again is really meaningful to everyone here.”