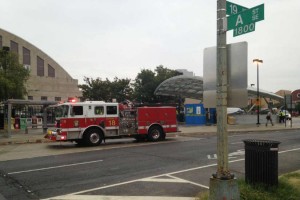 In a letter sent to the Washington Metropolitan Area Transit Authority this week, ANC 6B commissioners wrote that Metro officials have not adequately communicated with community members about the service interruptions, which are set to last six months. WMATA decided to cut rush-hour service to Stadium-Armory to repair a 9-megawatt power substation that helps power Metro trains, which caught fire last week.

“The advance communication so far has been unacceptable,” the letter says. “WMATA didn’t notify the local schools, so many children were late yesterday morning and marked tardy.”

The commissioners requested that Metro officials provide more information on why the plan to cut service to the station was chosen, what other alternatives were considered and how confident Metro is that the service disruptions only will last six months. They also requested monthly updates from WMATA on construction progress.

“ANC 6B residents aren’t faceless numbers,” the letter says. “Over 20,000 individuals live in ANC 6B and until yesterday, they relied on Metro to go to work, transport their children to school and visit with friends in other parts of the city.”

A WMATA representative didn’t immediately respond to a request for comment.

Residents who live near the station have complained that Metro officials have not made enough of an effort to alert riders about the service cuts. Earlier this week, Tim Krepp, an area resident and husband of ANC 6B commissioner Denise Krepp, posted his own signs around the station warning people about the service changes after noticing that WMATA had not yet posted any notices.

Never mind, @wmata. We got this. pic.twitter.com/OTWoOsPsfQ

On Monday, Councilman Charles Allen of Ward 6 and Councilwoman Yvette Alexander of Ward 7 wrote an open letter to WMATA officials asking them to reconsider their decision to suspend service to the station.