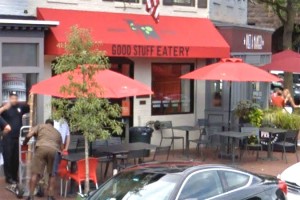 The robbery happened at Good Stuff Eatery (303 Pennsylvania Ave. SE) about 10:45 p.m. Saturday. The restaurant, which specializes in hamburgers, milkshakes and fries, is owned by “Top Chef” contestant Spike Mendelsohn.

The thieves entered through the back of the eatery and flashed a handgun near at least one person, according to authorities. The men then robbed the restaurant of cash and fled.

They were last seen getting in a four-door car that was dark in color. The vehicle had Maryland license plates.

No injuries were reported in connection with the robbery.

A Good Stuff Eatery representative didn’t immediately respond to a request for comment.

The carjacking occurred near Half and I streets SE about 5:15 a.m. The scene of the crime is four blocks north of Nationals Park.

A man was driving a black, 2015 Mercedes-Benz E-Class E350 Sedan when a car drove up to it, according to authorities. A passenger then got out of the vehicle with a handgun, ordering the victim to give up the Mercedes-Benz.

The thief soon got in the Mercedes-Benz and drove away.

In addition to the fatal shooting on the H Street corridor Saturday, authorities said the Capitol Hill area has had other crime since Friday, including: