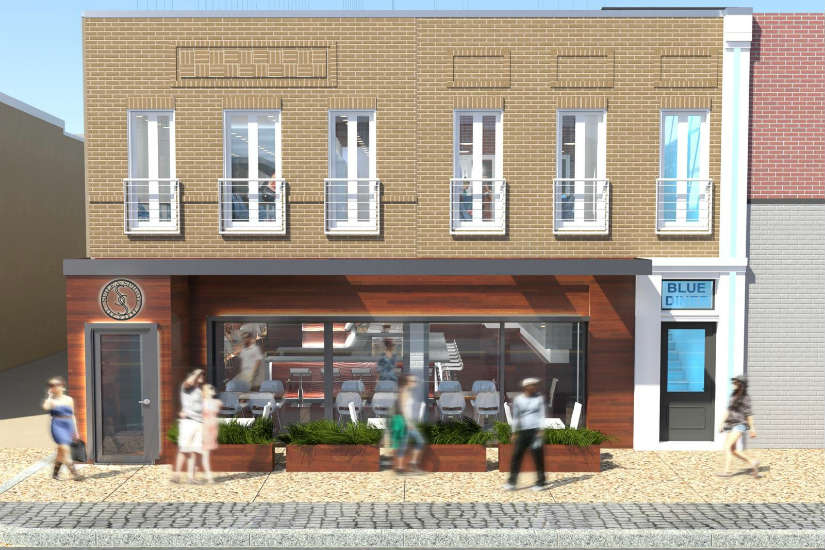 Cask ales and 24-hour dining might arrive under one roof on the H Street corridor in the coming months.

Justin Harbin and his father, Larry, are planning to open an English pub and an all-night diner above it at 1248-1250 H St. NE this spring.

Spile & Spigot, the pub, will occupy the ground floor of the building and will focus on cask ales, which are beers stored and served without the nitrogen or carbon dioxide pressure necessary for a keg, Justin said. Above the pub, Blue Diner will serve American diner staples, hopefully 24 hours a day, Justin said. Combined, the restaurants will have room for 170 to 180 people.

Justin said he and his father, who are first-time restaurateurs, came up with the idea for a cask ale bar first after Larry spent time near Birmingham, England, for work, where all his favorite pubs served the beers.

“When we first started, we recognized that almost nobody in the city serves cask ales at all, but it’s a very sought-after style of beer for the beer connoisseurs,” Justin said. “I personally very much enjoy a cask ale. I love the textures and flavors and the temperature,” which is typically warmer than keg beers.

Although their initial plans only called for a pub specializing in cask ales, Justin said he and his father learned that they would have a lot of extra space at 1248-1250 H Street and decided to look into putting a separate restaurant on the second floor.

“Our primary thought was the pub, and this property ended up being a lot larger than we had initially expected,” Justin said. “We thought we could have a two-level pub, but that might be too much. So, we decided why not open a diner?”

Justin said he hopes the diner will capitalize on the scarcity of late-night food options along H Street by staying open all night or for most of the night. The eatery will have classic American diner and breakfast food and won’t serve alcohol.

Downstairs, the pub will have a full-service dining room, with American and English pub staples. But the Harbins have yet to draft a food menu for either the Spile & Spigot or the Blue Diner.

As for Spile & Spigot’s beers, at least 12 cask beers are expected to go on tap. All of them will sit in a room with a window that will allow bar goers to see the storing and serving process for the beers. The pub also will have about five taps for non-cask beers, with a focus on local breweries.

“You certainly won’t find Miller Lite on draft at my place,” Justin said. “But we’ll have a few lines set aside for the locally produced American ales in CO2 kegs. We want to promote some local breweries and make sure we’re not alienating people who don’t like cask ales.”