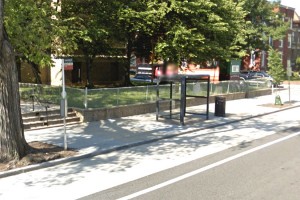 Teenagers fooling around in front of a Hill East public charter school might leave a stretch of East Capitol Street SE without a bus stop.

The Center City Public Charter Schools campus at 1503 East Capitol St. SE is pushing the District to remove a Metrobus stop in front of its entrance, where crowds of older teens who don’t go to the school often congregate. Center City serves students from preschool to eighth grade.

Joseph Speight, the school’s principal, said at a community meeting last night that it is “overcrowded” by people weekday afternoons. He noted students are “randomly walking out into the street” and misbehaving.

“It is very much so becoming unsafe for children — not just our children, but just children in that area,” Speight said at an ANC 6B transportation committee meeting.

The bus stop is two blocks from Eastern High School and across the street from The Cupboard market and the Hong Kong Carryout Chinese eatery, where students from the school often visit when they’re done with classes.

Rachel Skerritt, Eastern’s principal, said she supports the elimination of the stop.

“I’m definitely not blind or unaware of some of the challenges in terms of behavior issues and dismissal nonsense of students from all schools in the area,” she said.

The ANC panel did not vote on the proposal to eliminate the stop at the meeting, asking Speight and Skerritt to consider other plans to combat misbehavior, in addition to removing the stop.

“I think we need to be very careful about what we’re heading into doing right now because I’m hearing this is children,” said ANC commissioner Denise Krepp, whose district includes Center City. “Then maybe there is another situation we should be solving.”