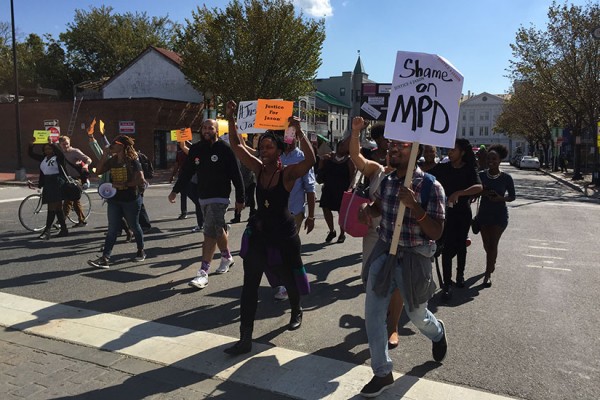 (Updated at 7:10 p.m.) A video of two white police officers detaining a young black man in D.C. sparked a demonstration that temporarily closed streets on Capitol Hill and in Navy Yard this afternoon.

About two dozen demonstrators marched from the “Blue Castle” building on 8th Street SE to the Citibank at 600 Pennsylvania Ave. SE, near where the young man was detained yesterday. Jason, whose age and last name couldn’t immediately be confirmed, was put in handcuffs after authorities received a report that three individuals might be trying to rob people at the bank’s ATM.

When police responded to the scene, the young man ran, according to authorities. Officers eventually took him down and handcuffed him after police said he resisted.

The video posted on Twitter yesterday shows Jason wearing headphones and lying on the ground as two officers tried to put his hands behind his back. The young man screamed and said he was “not resisting.”

The footage ended after the person filming the encounter was told to back off by a third officer. That person also was detained as police investigated.

Today we we're harassed and assaulted because " someone felt uncomfortable around us " in a bank . RETWEET ‼️ pic.twitter.com/E2XZaOgJgM

Neither Jason nor the person filming him were arrested, according to authorities.

The demonstrators today shouted “justice for Jason” and held a sign saying, “Shame on MPD,” as they marched and police watched nearby. But Jason didn’t appear to be in attendance.

Local activist Aaron Goggans, who was among the demonstrators, said he came out to show his support for Jason after he saw police “brutally twisting his arm” on the video.

“I have questions about everything,” he said.