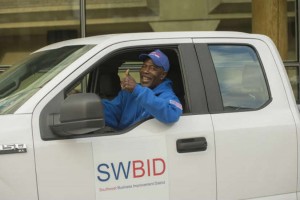 The BID, which started collecting money from local businesses in April, aims to serve the rapidly developing neighborhood with cleaning crews, park and public space renovations and events.

The BID is led by Steve Moore, who has been working with developers in the area for the past three years. Before signing on to lead the BID, Moore was president of the Washington, D.C. Economic Partnership, a group that promotes business opportunities and development throughout the district. Before that, Moore was the deputy executive of the Downtown DC BID.

Hill Now spoke with Moore about his hopes and plans for the BID and how he plans to keep up with the rapid pace of development in Southwest.

Hill Now: What areas does the Southwest BID cover?

In a way there’s like 3 bids here, our border is Independence Avenue in the north, the southern boundary is Maine Avenue and M Street, and east-west the boundaries are 15th Street SW and South Capitol Street. It’s a big BID. In essence there’s 3 worlds here: the federal world north of the highway, the waterfront and the area around 4th and M. Each area wants a transportation plan, a whole maintenance and safety plan and a little more thought looking forward about branding and identity.

It’s 850 acres, so in terms of size, it’s bigger than downtown or Capitol Hill.

I think some of the work early on is to ask what do [these three areas] want to be, what’s next? How clean is it? Those are the early concerns, each with a different emphasis in the three sub-areas.

What are some of the unique challenges for the Southwest BID?

What some people don’t understand about Southwest is the enormity of the development pipeline. We’re tracking about 36 development projects at this time: five hotels, two museums, 13 residential projects with about 3,400 residential units, and more. The amazing thing about all of that is most of that will finish in late 2017.

As a BID, how will you prepare for such a development boom?

That’s exactly the question. The first thing is to understand how different it will be here as all of these things come into play. Second, we have the opportunity to facilitate things and make sure all this stuff comes online more smoothly. This ranges from deciding where the Circulator should run to how to animate public spaces.

Can you elaborate on how you plan to animate public spaces?

There’s a little parking lot at 4th and M streets by the Metro where we’re saying this is the front door to the neighborhood, how do we make it come to life? The developers for that spot and us and some other groups experimented over the summer with little events and little markets. We’re going to meet in a few weeks and decide what that is going to be in the spring. I think we have the same question over at 7th Street and Maryland Avenue, in and around where the food trucks locate every day. There are probably five or six thousand people who have lunch there every day.

Lastly, we have other little opportunities, like this little duck pond on 6th Street. It could be a neighborhood gem, it just needs a little more attention. We said we would love to work with (Ward 6 Councilman) Charles Allen to make this a special place. We just had crews of guys go through there a couple times cleaning up. Those three places as stages for events and activities to be programed are where we’re starting. Public parks here need a lot of work, I think the community standard can be much higher.

What kind of changes are you preparing for in the area?

4th Street is now under construction for the Museum of the Bible, which intends to be a world center for religious studies. It will have scholars and symposiums and a collection of religious materials from around the world, and it’s huge. In it’s first year it will attract probably 3 million people, and it costs $800 million. There’s no sense of the scale of that and the Spy Museum moving across the street from the wharf and 3,400 residential units all happening within walking distance from each other. There are 5 hotels under construction here, it’s kind of like ‘where do you go first?’ The Southwest BID will rewrite literally every tour book of Washington, D.C. that’s in print because access to the wharf will change the way people will visit the city and the way they use it.

Southwest is already becoming, quietly, a very attractive alternative to other neighborhoods. It’s all just beginning though. There is a period of time in late 2017 to early 2018 where it all seems to hit and some of what we’re doing now is getting organized around that to make sure things happen on time.

Do you plan to be involved in sponsoring art and cultural events?

We went to the Urban Land Institute with the Southwest Neighborhood Assembly and the Westminster Presbyterian Church and said we have a lot of cultural venues here. We asked in aggregate, is this or could this be a creative or cultural district? What are the best practices when people ask that question and what do people do when they’re trying to form one? What that does is function like an audit which is to say there’s a lot of different cultural venues that we can bring together. I think it’s forcing us to look at the event calendar that already exists which is anything from annual arts fests up to the events now that are really taking hold on the water.

Can you talk a little about the street cleaning teams that are already working?

We talked to three different groups at length, and we happened to like the Ready, Willing and Working group from Capitol Hill. [Ready, Willing and Working is a group that hires ex-offenders and homeless people to work cleaning and maintenance jobs for the Captiol Hill BID] We did a contract with them in August and put the crews on the street in an advance basis in September. There’s 15 of them and they have routes that cover all of the BID area. We’re just kind of getting our feet on the ground figuring out what areas need special attention.

We pay them well, about $15/hour. They all have full benefits, the same benefits I have. They’re good guys, they all have a story to tell. Some of them are ex-offenders, some of them are homeless or were homeless. It’s not easy to get hired for these jobs and I think these guys are great.

You also have plans to hire neighborhood ambassadors: what will that job entail and have you hired and ambassadors yet?

No we haven’t. That’s a different job, you see people like them downtown. These are people that on one hand they’re giving directions to people and functioning like a friendly presence in neighborhood. There’s a lot of training that goes with that. And on the other hand they’re also eyes and ears for disorder. There’s a particular kind of training for that. We would like to put a crew of five to six together and have them on the street by April 1st.

What are some of the signs of the BID’s presence that residents and visitors have noticed or will notice?

The simplest thing is that it’s cleaner. We’ve been up and down as practice, taking tons and tons of sand and dirt out of streets that looked to us like they hadn’t been cleaned in years. Initially, that’s what people will see first: there’s no loose trash, no twigs and branches, trash cans are empty, those kind of things.

In the spring it’s different. In the spring there’s a more deliberate launch of ambassadors, the areas we talked about being programmed, and us taking on the maintenance and care of the duck pond. Those would be things that people would see most readily.

How has the BID been received by residents and other stakeholders so far?

I get the on-the-street response through the cleaning team. I think the cleaning teams are surprised that people have been walking up to them to say thank you and speak to them. I stay close to, as you might guess, government officials, including all the federal officials and the ANC here. I’m kind of in regular communication with the ANC and my sense is there’s a nice partnership there, things that are of interest to them are of interest to us. And I stay close to the neighborhood associations. The fortunate thing is the relationships are good, people actually like each other. That’s money in the bank early on like this.

Are you planning to hire additional staff and, if so, what kind of things will they focus on?

I think we have to think through transportation in a much bigger way. It’s possible that there’s a whole look at transportation in Southwest that will require us not to be staffed with just our person, but a real team of people working transportation. Everything from shuttle buses to water shuttles.

When it comes to the events side, there’s so much interest in public art, performance space, programming the spaces we just mentioned, it would be easy to see a team of people working on those as well.

At the risk of sounding completely nuts, I think there could be a really highly trained team of horticulturists as well. Our level of expectation can go way way up. I think that we have that fortunate period of time to dream a little and think how high can we raise those standards, how much fun can we really have over here. Let’s do the best we can do or the best anybody’s ever done.

This interview has been edited for clarity and length.