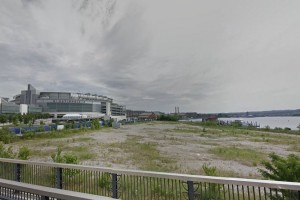 The owner of Bardo Brewpub in Trinidad has applied for a liquor license for a scaled-down version of the “BeerDisneyLand” that he planned to build on unused land in Navy Yard.

Bardo owner Bill Stewart originally submitted an application to the Alcoholic Beverage Regulation Administration in March for a beer garden at 25 Potomac Ave. SE that would hold a maximum of 2,000 people. However, that application was rescinded due to concerns about unruly crowds, noise levels and security concerns, JDLand reported.

This time around, Stewart is planning to cap the maximum total occupancy for the beer garden at 750 people and made several other changes in response to feedback and concerns from local Advisory Neighborhood Commissioners and D.C. Police.

“They wanted security personnel trained in an ABRA-approved course and to move the entrance closer to 1st Street, and that was fine with us,” Stewart said.

Stewart is also no longer seeking permission to have live entertainment at the beer garden, and has agreed to limit drinking to about half of the property. Other parts of the two-acre lot will be used as a dog park, bike shop and open green space.

The beer garden will still feature beers brewed on-location and space for food trucks, according to the license application.

Before Stewart submitted his initial application, several other groups had plans for larger-scale event spaces on the plot of land next to Nationals Park. All of those applications were rejected.

“Our main problem is that they associate us with the previous applications, which were just crazy stuff,” Stewart said. “They had plans for 100 port-a-potties and 6,000 people or something, and we’re getting tarred with that brush even though we’re a completely different thing.”

Stewart said he hopes this application will be enough to ease the concerns of the ANC members and the police, but says he still doesn’t know if ABRA will approve the project. Those who object to the beer garden have until Nov. 30 to lodge a complaint with ABRA.

Barring any complaints or application rejections, Stewart says he could still be ready to open the beer garden on opening day of the baseball season in spring.