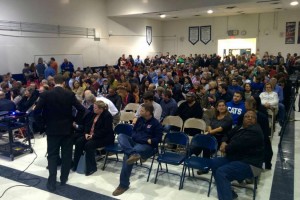 More than 300 people packed into the cafeteria of Friendship Public Charter school to voice their concerns about recent crime to Ward 6 Councilman Charles Allen and Metropolitan Police Chief Cathy Lanier.

The 7 p.m. meeting was organized by Allen in response to recent crime on and around Capitol Hill. D.C. Del. Eleanor Holmes Norton, t-Large Councilwoman Elissa Silverman, Assistant U.S. Attorney Doug Klein and a representatives from the mayor’s office were also at the meeting.

Allen began the meeting by outlining work on new bills in the D.C. Council dealing with crime.

In response to several audience questions, Lanier said she has increased foot and bike patrols around the area, but that more police visibility alone can’t stop crime. She also emphasized that a large amount of the crime is being committed by small groups of people who may not live in the area.

Several people vented their frustration with the U.S. Attorney’s office, which is responsible for prosecuting crimes in the District, claiming that too many crimes go unprosecuted.

ANC 6B commissioners Denise Krepp and Diane Hoskins both asked the representative from the U.S. Attorney’s office for data on what percent of crimes are investigated and prosecuted. Both commissioners took to Twitter to say that data needs to be released after the representative from the U.S. Attorney said he could not provide it.

In response to questions about how community members can stay aware of police activity, Allen suggested several outlets for residents, which he also tweeted.

You can sign up for MPD 1D listserv here: https://t.co/142FpOswdU