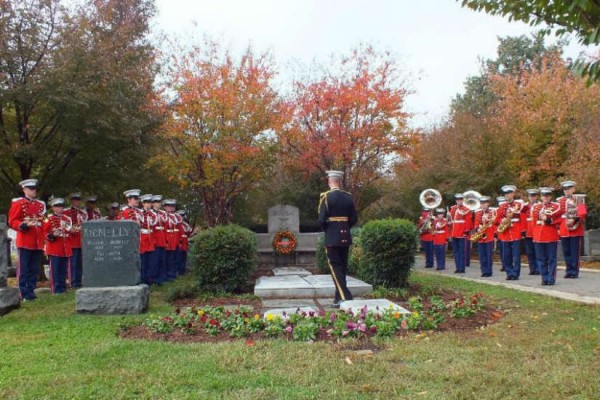 The Congressional Cemetery will hold a birthday celebration for one of their most famous residents tomorrow morning.

The Marine Corps Band will be on hand at 10:30 at the cemetery at 1801 E St. SE to commemorate the 161st birthday of composer John Philip Sousa.

As the band plays a medley of Sousa’s most famous marches, attendants can enjoy free birthday cake. There will also be a Sousa impersonator there to chat with guests.

Before the celebration, the cemetery will also present two awards for volunteers, the Benjamin B. French Masonic Lodge #15 Volunteer Award and the John Philip Sousa distinguished service award presented by the Hiram-Takoma Masonic Lodge #10.

The celebration of Sousa’s birthday dates back to times when the cemetery was mostly neglected. In the 80s and 90s, Marine band members would clear off the area around Sousa’s grave once a year to pay tribute to the “King of March,” who was also a member of the Marine Corps.

Sousa was a longtime resident of the Barracks Row area of Capitol Hill and is one of the most famous people buried at Congressional Cemetery.

Dayle Dooley, the archivist at Congressional Cemetery expects a big crowd at this year’s celebration, with two school groups planning to attend and sunny weather in the forecast.