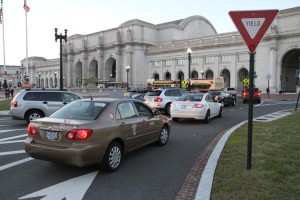 A man was shot by an off-duty Maryland police officer at Union Station Saturday night after stabbing a woman.

The stabbing occurred about 8:15 p.m. outside the First Street NW Union Station Metro station entrance, police said in an email Sunday evening. The off-duty police officer saw the man, who police identified as 25-year-old Rashad Bugg-Bey of Northeast D.C., slash a woman and then enter the station.

The officer, who works in Baltimore County, told the Bugg-Bey to drop the knife and when he refused, shot him and detained him until police arrived. Bugg Bey was hospitalized with non-life threatening injuries.

Police said that Bugg-Bey and the woman he stabbed knew each other and may have been in a relationship. The woman was hospitalized with non-life threatening injuries.

Another woman at the scene was also hospitalized after receiving a gunshot wound to the ankle. She was treated and released from the hospital, according to police.

Bugg-Bey has been charged with assault with a dangerous weapon and police are still investigating the incident. The circumstances of this shooting were very similar to another officer-involved shooting at Union Station on Sept. 11.