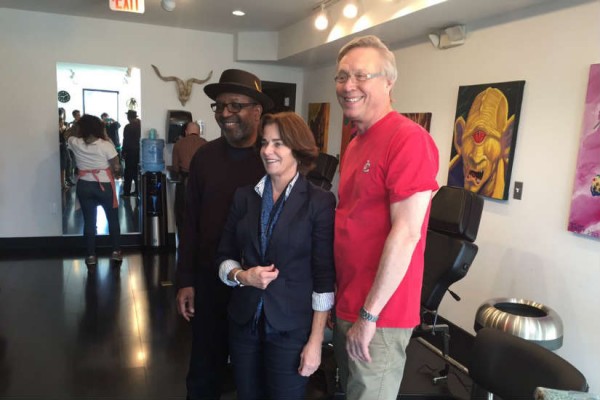 All three pledged in October to get the tattoos if a $3,000 donation was made to WAMU, the American University-based NPR affiliate that airs the Kojo Nnamdi Show on weekdays from noon to 2 p.m.

After today’s show, Nnamdi met Cheh and Sherwood at the H Street parlor to honor their commitment. They were also joined by the 23-year-old listener who made the $3,000 donation. The donor, Nick (WAMU did not release his last name) will also be getting a matching tattoo.

Nnamdi, Cheh and Sherwood got their tattoos simultaneously from Fatty and fellow Fatty’s tattoo artists Eric Doyle and Nikki Balls.

“When I heard about the donation initially, I reached out to all three of them to let them know I’d be more than happy to do their tattoos considering Fatty’s has been an institution in D.C. for the last two decades and these people are all icons of our city,” Fatty’s owner, who only goes by the name Fatty, said. “They’ve all done a lot to help our city out.”

Fatty said that District flag tattoos are fairly common at his D.C. locations on H Street and in Dupont Circle. In an interview just before Nnamdi, Cheh and Sherwood arrived at his parlor, Fatty said that some of them seemed nervous. This will be the first tattoo for Nnamdi and Sherwood.

“I’ve met them all personally, and I think Kojo’s a little nervous, but Tom seems pretty amped up about it so I think they’ll do fine,” he said.

The Kojo Nnamdi show live-streamed the process of Periscope and also tweeted throughout. Check out some highlights below:

"It was painful but well worth it," says @marycheh of her #dcflagtattoo. Watch live: https://t.co/ro3ufXuFVd pic.twitter.com/jQnNtV8nE0