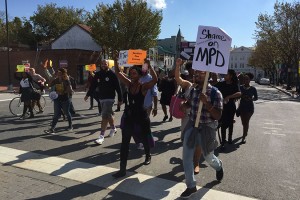 The investigation begun after a video showing the forceful handcuffing of 18-year-old Jason Goolsby, who is black, by two white officers. Goolsby was handcuffed after police received a report that three individuals might be trying to rob people at an ATM on 600 Pennsylvania Ave. SE. Today, Lanier announced that the officers were not found guilty of any wrongdoing in the encounter.

“We feel that the officers’ actions, given the entirety of the circumstances, were appropriate and within department policy,” Lanier said.

Neither Goolsby nor his friends who were with him at the time were arrested or charged with a crime, though Goolsby was handcuffed for a period of time after fleeing the police when they first arrived.

There was no formal complaint filed with the police department, but Lanier called for an investigation into an incident after Goolsby’s lawyer told media that Goolsby had been detained for two hours or more.

A video of Goolsby being handcuffed sparked protests, including a march on Capitol Hill in which attendees chanted “justice for Jason.” Lanier repeatedly emphasized the fact that the video that sparked protests only showed a small part of the encounter.

Though Lanier emphasized that the officers acted appropriately, she did note some details that “changed the dynamic” of the incident, including the fact that a 911 dispatcher incorrectly told officers that a robbery had been occurred.

“There was a mistake from the dispatcher in repeating the call to the responding officer that these individuals had robbed someone, were involved in a robbery,” she said. “So even though another officer came over the air at a later time and said it’s suspicion, it does change the dynamic.”

Lanier also said that the police department hopes to start using body cameras on officers in 2016, which would make investigations into incidents easier.

more stories
Previous
Hill Pet of the Week: Daisy
Next
What to Expect for Thanksgiving Weekend in the Capitol Hill Area