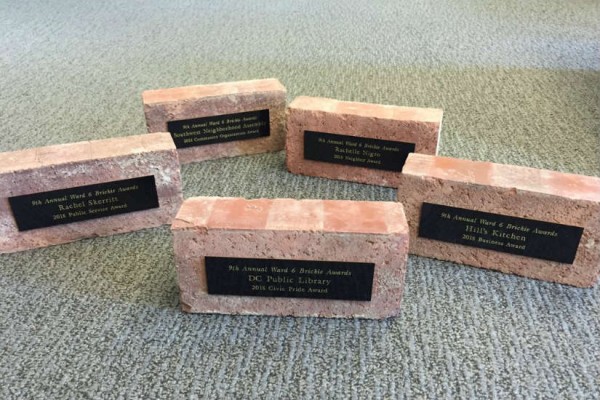 Ward 6 Councilman Charles Allen announced the winners of the ninth annual Brickie awards celebrating the contributions by individuals and organizations to the Capitol Hill area community.

The five awards will be presented at a ceremony at 6 p.m. today at the Eastern Market North Hall.

Eastern High School principal Rachel Skerritt won the Public Service Award for helping lead the transformation of the high school, according to a statement from Allen.

“The energy she brings to the school to create award-winning programs, to inspire young learners and grow the confidence in public education is motivating a generation of school leaders and communities,” he said in the statement.

“SWNA may have just celebrated its fiftieth anniversary, but the organization gets stronger every day,” Allen said. “Whether advocating for fair housing, preserving neighborhood history or helping chart the course of the Southwest Waterfront’s future, SWNA and its neighborhood leaders are a group I can count on.”

Councilman Allen will present the awards to the winners at the ceremony today from 6-8 p.m. The ceremony is free and open to the public and will include free food and drink from area restaurants.