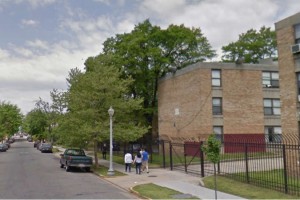 One woman was arrested early this morning after an overnight shooting near the Potomac Gardens apartments in Hill East.

The shooting occurred just before 2:55 a.m.on the 1200 block of I Street SE, according to a police spokesperson.

Shortly after the shooting, a woman was detained by police, though police did not provide any further information on her.

A spokesperson for D.C. Fire and EMS confirmed that one person was hospitalized with gunshot wounds and is in critical condition.