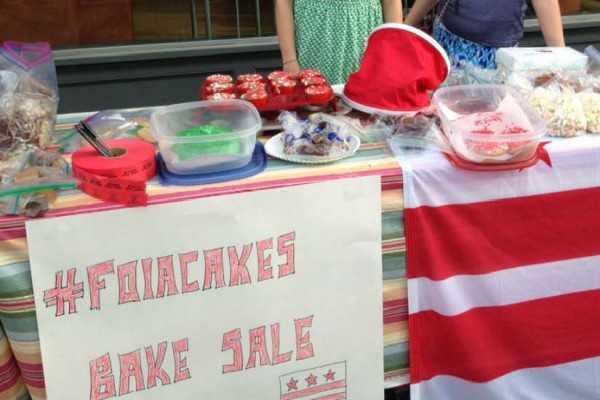 A bake sale held at Eastern Market this weekend raised more than $1,800 to pay for Capitol Hill crime statistics from the Department of Justice.

The sale was organized by Capitol Hill and Hill East residents to pay for information about what percentage of crimes and arrests in the area result in prosecutions. The information was requested from the U.S. Attorney’s Office, which handles prosecutions in the District, via a Freedom of Information Act request filed by Advisory Neighborhood Commision 6B Commissioner Denise Krepp Nov. 5.

In its response to the request, the Department of Justice, which oversees the U.S. Attorney’s Office, told Krepp that it would cost $40 per hour of work needed to collect the data.

Krepp indicated that she would be willing to pay up to $1,000 for the information, but neighbors had a different idea, and organized a bake sale to cover the cost.

The #foiacakes bake sale took place on Sunday at Eastern Market and raised $1,097 by selling cakes and cookies and raffling off two Georgetown basketball game tickets donated by Events DC.

Krepp also raised $420 in direct donations and a $350 donation from Dangerously Delicious Pies, which donated a portion of its proceeds on Sunday to the fund, bringing the total amount raised to $1,867.

In a letter to the Department of Justice, Krepp credited the generosity of Capitol Hill residents and said that she will spend all the money on the requested information.

The exact cost of the information requested is uncertain, as it depends on the amount of time it takes the Department of Justice to collect the data. Krepp said on Monday that if the information costs less than the amount raised, she will donate the remaining money to a local organizations that advocates for transparency in local government.