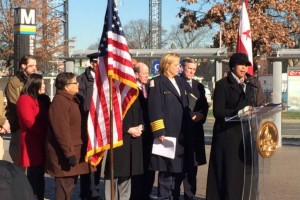 An ABC7 news crew car was broken into while the reporters were covering a press conference on crime at the Eastern Market Metro station, according to ABC7.

The thief smashed a window in the car and stole equipment. The reporter said his car was parked just feet away from the press conference, where Mayor Muriel Bowser and Metropolitan Police Department Chief Cathy Lanier announced a new task force to combat robberies, particularly those committed by repeat offenders.

The new Robbery Intervention Partnership Task Force is an effort to bring together MPD, the Metro Transit Police Department, the Office of the Attorney General and the U.S. Attorney’s Office to focus on curtailing robberies.

The press conference, which was also attended by Ward 6 Councilman Charles Allen and At-Large Councilwoman Anita Bonds, was held at the entrance to the Eastern Market Metro station.