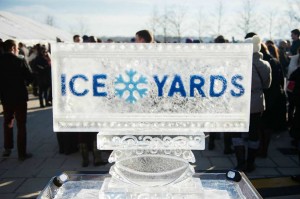 Organizers of Ice Yards, the annual winter party hosted by The Yards development at 301 Water St. SE, got a little more winter than they bargained for this year.

The party, which was originally scheduled to take place on Saturday, has been moved to Sunday due to the blizzard that is expected to drop over a foot of snow in the area Friday night.

Residents age 21 and up can expect boozy snow cones, ice sculptures, live music, and food and drink vendors from across the area at the event, which will run from 2 to 6 p.m. Sunday. Navy Yard eatery Due South will have a beer garden at the event and local bands Party Like It’s and Jeff From Accounting will play sets.

Though the event will feature two large, heated tents, organizers encourage people to dress for the weather. Tickets to the event are $10 and are available online or at the door.

Annie Perezchica, the vice president of events for BrandLinkDC who planned the event, said that although the party had to be moved back a day because of the storm, she thinks the snow will make the party even better on Sunday.

There is, however, one thing Perezchica planned for that will no longer be necessary: fake snow

“I had a snow machine ordered because I wanted it to snow inside and I had to cancel it,” she said. “I have exactly what I wanted, a winter wonderland.”