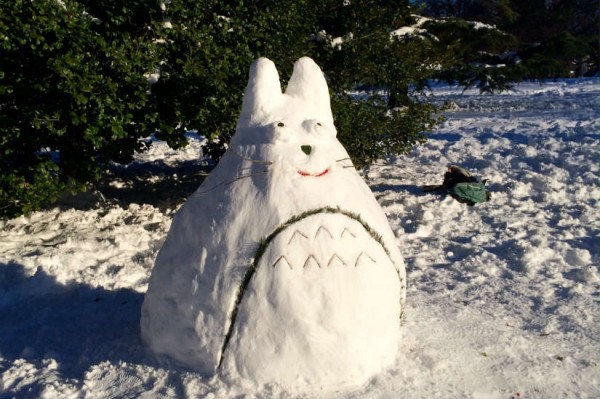 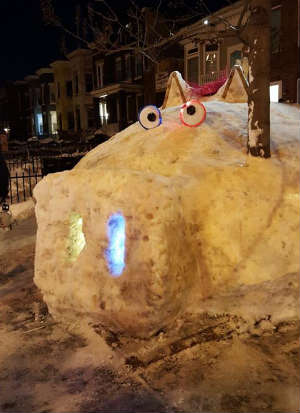 The dig out continued in the Capitol Hill area today, with many main streets cleared but sidewalks and side streets still covered in snow. With Mayor Muriel Bowser still encouraging drivers and pedestrians to stay off the streets, many Hill area residents spent the day clearing the snow or finding creative ways to enjoy it.

Several readers sent photos of snow forts around the area, but the best was the “Pigloo” at the intersection of 3rd and K streets NE. In addition to being a genius combination of an igloo and a pig, the Pigloo also appears to have indoor lighting.

Another reader sent us the picture above of Totoro, a character in the movie My Neighbor Totoro and a very handsome snowman.

Across the Hill, ANC 6B Commissioner Denise Krepp shared a photo of a “spacious new one bedroom” igloo in Hill East.

However, it wasn’t all fun and games around the Hill. As residents leave their homes to shake off cabin fever, many have been participating in the time-honored tradition of snow shaming. Krepp’s ANC 6B colleague Nick Berger posted a roundup on his blog of Hill East businesses that were great about shoveling their sidewalks and those that didn’t even try.

And while many residents took to Twitter to complain about businesses in their neighborhoods that haven’t shoveled sidewalks, Tommy Wells, the Director of the District Department of Energy and Environment said that, on the whole, Capitol Hill area sidewalks were looking good.

More sidewalks were shoveled yesterday than I've ever seen on Capitol Hill after a snow. Such amazing volunteers! #snowzilla

Got any pictures of your snow day in the Capitol Hill area? Email us or tweet at us and let us know how you’re making the dig out fun.