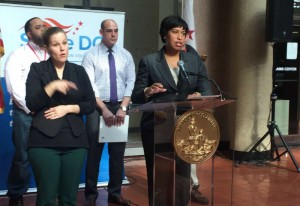 The snow emergency that was initiated on Friday morning is set to end at 6:30 p.m. Wednesday, Bowser said.

Those who parked along snow emergency routes during the snow emergency and were towed can pick up their cars, but the Department of Public Works warns that they might have to dig them out of the impound lot.

If you're going to DC impound lot to recover your car that was towed, bring a shovel. @DCDPW advises you'll have to dig your car out.

Bowser also announced that DC Public Schools have been cleared and will be ready for classes to start tomorrow.

The District government will also begin issuing fines to businesses that have not cleared sidewalks in front of their properties. A new law this year allows the Department of Public Works to fine homeowners and business owners who do not remove snow and ice from sidewalks adjacent to their property.

However, Bowser said that given the severity of the recent storm, fines will not be issued to homeowners or residential properties.

D.C. Public Schools and government offices will all be open tomorrow. The D.C. Public Charter School Board is updating the status of charter schools throughout the District online.

Though the District government will be open, trash collection will still be on hold until Thursday at the earliest. DPW announced that it will attempt to reach every regular route with pickup scheduled for Thursday or Friday. Regular trash collection service will resume on Monday.