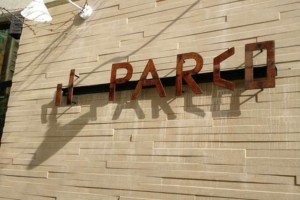 Il Parco, a Neapolitan-style Italian restaurant at Canal Park is planning to open sometime this weekend with a limited menu.

The eatery at 202 M St. SE is replacing Park Tavern, which closed in November. The eatery is still owned by Barracks Row Entertainment, the restaurant group led by Richard Cervera.

The Neapolitan food will be prepared by Roshan Ashiq who was previously a chef at il Canale in Georgetown. Cervera said the restaurant will also have an extensive Italian wine collection and several Italian craft beers that are hard to find stateside.

Still, Cervera said the main focus of the eatery is its pizza, which will be cooked in a 7,000 pound, made-in-Italy wood-fired oven.

“I think we have the biggest Italian-made oven in the city,” he said. “We actually had to remove a glass wall to bring it in with a forklift, so that’s a big visual cue when you walk in the front door.”

Cervera said he planned on the soft opening so he and his staff could gradually add to the menu and make sure all of the new equipment works properly. Because Cervera doesn’t know exactly when the eatery will open this weekend, ice skaters at Canal Park may be the first to try the new restaurant. Cervera said that once the ice rink closes in the Spring he plans to have patio seating outside the restaurant.

more stories
Previous
What to Expect for the Weekend in the Capitol Hill Area
Next
Weekend Crime: Man Shot in Southwest Friday Night