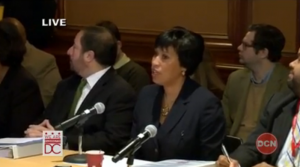 Mayor Muriel Bowser this morning announced plans to close the homeless shelter at D.C. General by 2018 and replace it with smaller neighborhood shelters in all eight Wards.

Closing the shelter inside the former D.C. General hospital at 1900 Massachusetts Ave. SE was a goal of Bowser and her predecessor Vincent Gray. This morning, Bowser announced the locations of smaller shelters that will replace D.C. General.

In a press conference before the District Council earlier today, Bowser said that D.C. General is “too big, too old and too far removed from the services that get families back on their feet.”

The last of the smaller shelters are set to complete construction by September 2018, at which point families still in D.C. General will be relocated and the aging shelter will be closed.

In Ward 6, a new shelter will be established at the site of the Blind Whino art space at 700 Delaware Ave. SW. The shelter is slated to house up to 50 families at a time and will include a playground and recreation space, computer lab and ongoing support services for families.

The District Department of General Services plans to build a new, seven-story building beside the existing Blind Whino building. Construction is set to begin next February and is expected to be completed in May 2018. According to architect’s renderings, the colorful church building that currently houses Blind Whino will remain an art space with the shelter next to it.

Ward 6 Councilman Charles Allen supported the Mayor’s plan at the District Council meeting this morning, calling on Ward 6 residents to support the plan as well.

The other planned shelters will be located in the following locations: