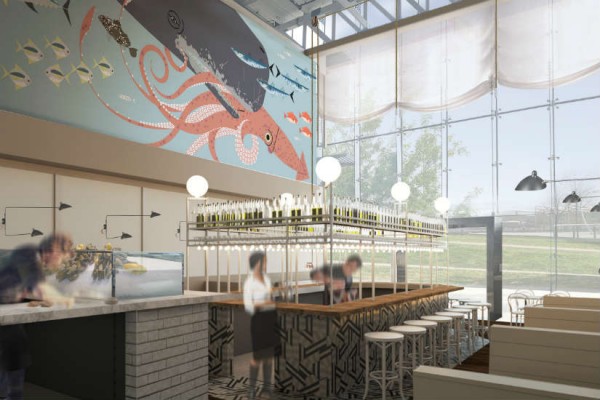 The Lumber Shed building near Yards Park in Navy Yard will soon get its fifth eatery, Whaley’s raw bar and seafood restaurant.

Whaley’s is slated to open this spring in the building at 301 Water St. SE, according to a press release. The restaurant is a new project by Nick and David Wiseman, the brothers behind DGS Delicatessen.

For Whaley’s the brothers are planning a seafood menu that includes clam chowder, scallop crudo and grilled swordfish, in addition to raw oysters. The restaurant is set to initially open for dinner only, with plans to expand later into lunch and brunch.

Designs for the restaurant show a 20-seat bar and a 40-seat dining room with additional seating outdoors. The eatery is named after Zedechiah Whaley, the commander of the Maryland Navy during the Revolutionary War.

A different seafood restaurant, Navy Yard Oyster Company had initially planned to open in this location in spring 2015, but backed out of its lease in August.