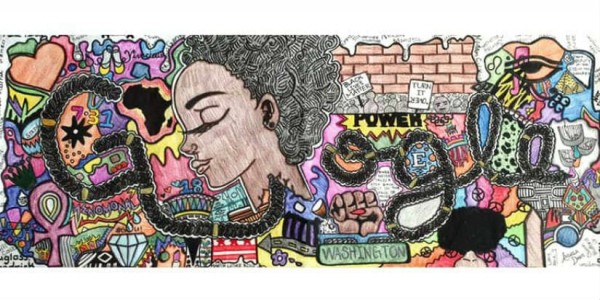 Visitors to Google could soon see an illustration by a Eastern High School student on the site’s homepage.

Sophomore Akilah Johnson is a finalist in Google’s annual doodle contest, in which grade-school students compete to have their artwork featured on the search engine’s homepage. The theme of this year’s contest is “what makes me… me.”

Johnson’s illustration, titled “My Afrocentric Life” was selected as the best entry from D.C. and will now compete against the winners from all 50 states and two other territories.

In her illustration, Johnson used a box braid to spell out Google and surrounded the word with symbols of black pride and Afrocentrism, including a picture of Africa and a person holding a “Black Lives Matter” sign.

Johnson told the Washington Post’s Michael Cavna that the illustration took her about two weeks to complete and was inspired by her time as a child at Roots Public Charter School and Roots Activity Learning Center.

Supporters can vote for Johnson’s illustration online until Feb. 22.

The vote will select five finalists, from which a panel of judges will pick the winner. In addition to having their artwork featured on Google, the winner will also receive a $30,000 college scholarship and the winner’s school will receive a $50,000 Google for Education grant.