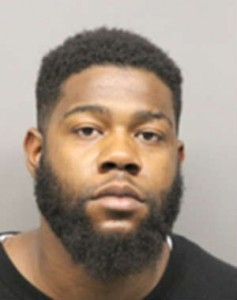 Police have arrested two men in connection with a shooting at a barber shop near Barracks Row last Friday and released the name and photo of the third suspect.

Both men were charged with assault with a deadly weapon in connection with the shooting on Friday, which injured a man and his 21-month-old child.

The shooting happened at a barber shop at 1005 8th St. SE just before 1:45 p.m. Friday, Feb. 12. According to police, three masked men entered the barber shop and opened fire, striking a 24-year-old man in the leg and grazing the man’s infant son. Both victims were treated and released from the hospital over the weekend.

Today, police also released the name and photo of the third suspect in the shooting. The third suspects name is Anthony Chambers and police said he should be considered armed and dangerous.

Anybody with information about Anthony Chambers is asked to call the police at 202-727-9099 or text the text tip line by messaging 50411.