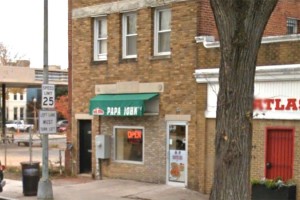 A Papa John’s Pizza about two blocks east of the Marine Barracks had a run in with two burglars early yesterday morning, a day after a masked man with a gun robbed the shop, police said.

A surveillance camera caught a man smashing the shop’s glass front door with a brick, according to authorities. He went into he Papa John’s soon after and pried open two cash registers with a screwdriver.

But there wasn’t any cash inside them.

The first thief came back, however. He grabbed his brick and then left for good.