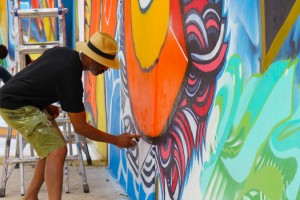 Muralists from across the globe will meet in NoMa in May to beautify the neighborhood, according to the NoMa Business Improvement District (BID).

NoMa will serve as host to POW! WOW!, “a global art movement that celebrates culture, music and art in cities around the world,” during the last two weeks in May.

During the festival, local and international artist will paint walls throughout the neighborhood and deliver “classes, performances and lectures in addition to live art installations,” the BID said in a press release.

Read more about POW! WOW! below:

Starting humbly as a small art exhibition with a handful of artists in Hong Kong, the newest editions of POW!WOW! now encompasses creatives from all over the world painting in Honolulu and other cities.

Over the past five years POW! WOW! has grown into a major market art festival with a line up and experience that rivals some of the best in the world. POW! WOW! is an amenity with substantial economic and brand impact. The event is also a vehicle to celebrate cities’ art and culture, and draws tens of thousands of people to its doors.