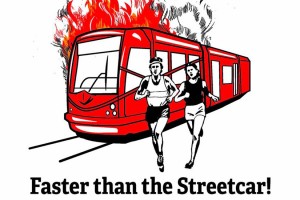 It’s said that Superman is faster than a speeding bullet. This weekend, a group of local runners will see whether they’re faster than a D.C. Streetcar.

Members of the H Street Runners Club will race alongside the streetcar during the inaugural “Running of the Streetcar” event this Saturday at 3 p.m. Runners will meet at the foot of the Hopscotch Bridge (H and 3rd streets NE).

More information from the Runners Club:

Inspired by our club motto –“Faster than the Streetcar!” — this event involves a fun run along the H Street/Benning Road Streetcar Line followed by libations at some of our favorite H Street establishments.

We’ll begin by boarding the Streetcar at the Hopscotch Bridge stop for a ride all the way to the end of the line at the intersection of Benning Road and Oklahoma Avenue, NE — a distance of approximately 2 miles. From there we’ll proceed to run or jog “faster than the streetcar” back to the start of the line (or thereabouts).

After the race, runners will meet at several H Street NE bars to toast victory or drown their sorrows.