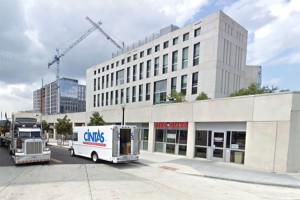 A would-be thief sought to get a hamburger at a NoMa restaurant yesterday afternoon, after he failed to obtain the money inside a cash register at the eatery, police said.

The attempted robbery happened on the 1300 block of 2nd Street NE about 4:30 p.m. Monday. Authorities didn’t identify the business. But the block includes a Five Guys Burgers and Fries.

The man gave a threatening note to a restaurant employee in his quest to commit a robbery, police said.

“This is a stick up,” the note said, according to authorities. “Give me everything you have in the register or you are going to get hurt.”

But the worker told the man the register was locked.

The man then asked for a hamburger. The employee told the man he couldn’t have a burger, either.

Police arrested someone in connection with the robbery, according to authorities. The individual’s identity wasn’t immediately clear, however.